The Boy Born with a Pinhole Heart 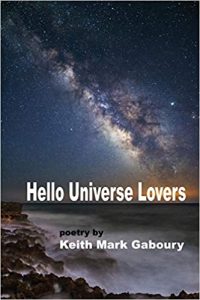 Hello Universe Lovers is a time-bending journey into the “unmapped atmosphere” where the “cosmos is alive,” a live, lithe, many-armed serpent of possibility and imagination. From the Lunar Kingdom to the Planet X Soap Opera, you might find the Milky Way in L.A. or make a pitstop at the Moon Country Museum and Bar. Here in the far reaches of space, we are gifted a “cosmic sight,” a view of the moon, a fresh perspective of the whole of Earth in its “pocket of light” as outer space “slavishly / pipes the unity of gravity into our universe.” Bring your “alien heart,” and “gather as one nucleus” as poet Keith M. Gaboury gives us so many wonderfully strange and daring way to return home.

Jennifer K. Sweeney, author of How to Live on Bread and Music

There’s a new ultimate trip and Keith Mark Gaboury is our director. He’ll fly us from a galaxy where we’ll “trip / on some cracked dark matter” to The Apollo National Park to see “…a glass case / showcasing Armstrong’s / first footprint…” Gaboury’s ambitious, lofty poems celebrate science fiction from its pulpy beginnings to its futureless present. The heroes of Hello Universe Lovers are not ship captains, explorers, or scientists–but the grunts, the citizens of the belly-side of space or the humans stranded on earth. His people are brown-baggers, miners, pulling shifts at The Photon Refinery their heads “…swirling / at the intersection of host and desire / under the only sky” they will ever know. Gaboury’s arresting images and deft lines elucidate the collision of a space opera and a blues sung by Martian farmers. Gaboury dazzles!

Peter Jay Shippy, author of How to Build the Ghost in Your Attic

The speaker of the poem, “Blood in the Cosmos,” articulates, with a panache typical of the rest of the book that is sometimes understated, sometimes brazen, the project of Keith M. Gaboury’s Hello Universe Lovers: “I look upon the cosmos / like a body sliced open / by my eye of precision / asking questions / under constellations I praise.” Gaboury’s musing over space legends couple with a down-to-earth reckoning directed towards an earthling’s concerns. On the shores of Gaboury’s fecund imagination, every type of unexpected flotsam washes up, as in “Planet X Soap Opera,” in which, of all things, “a flat-earther / swam into the Atlantic, / seeking to breaststroke off the globe” and “dairy spilled / before the plot points // of exoskeleton females / dramatizing within the off-Nowehre theatrics.” Read Hello Universe Lovers and experience the thrill a mind like Gaboury’s milking cosmic strangeness can summon. 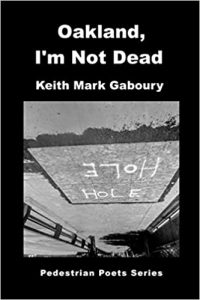 The compelling prose poems in Oakland, I’m Not Dead are infused with surreal imagery, humor, and memorable vignettes. Keith Mark Gaboury breathes human awareness into animals, body parts, and plants, even produce, and then he engages the entity in conversation. Each poem draws you into an alternate world and inspires you to keep reading. In “Childhood Conversation,” we meet Elizabeth, the poet’s hippocampus and keeper of his childhood memory, and the woodpecker in “New Roommate” launches a convincing argument to accept droppings as rent. In “Birth Head,” a daughter born with a head of lettuce becomes one of many heads in the supermarket aisle. As a Walt Whitman lover, I especially enjoyed “Brain Dreaming,” where a synthetic reproduction of Whitman’s brain might be reincarnated in a diner’s stomach. Set in the common surroundings of Lake Merritt, grocery stores, and apartments, the poems reveal the magic around us. In the title poem, for example, the city of Oakland mutates into deadly weather, a squid, and a feeding buzzard. These poems will leave you interrogating your environment and enjoying the experience.

I had such fun reading these prose poems. Anyone who has every heard Keith Mark Gaboury read knows that he’ll meet you any day on the corner of Weird and Absurd with the Monk of Real Life meditating in the intersection. Every one of these nineteen pieces is a dense block of surreal dialogue – these are conversation poems, and each one is a gem of its own shining. A man whose wife has given birth to a child with a head of lettuce has a distressing encounter in the produce aisle. A person has a run-in with an adamant member of the Anti-Goblin Task Force. A mid-life crisis results in one speaker turning into a tadpole. We find a couple of questionable interactions with repair people. A couple of not-quite appropriate situations with pineapples. A suspenseful discussion about a lost dog. And a heartfelt and revealing chat between a coyote and the City of Oakland. And quite a bit more. I totally recommend picking up some of his work. Keith Mark Gaboury is an understated writer whose work makes a lot of colorful noise in your brain. He’s also an understated writer who’s had bad luck with small presses, both of which who’ve published his books having closed. You might find a few copies on Amazon or the like, but if you come across him at a reading or event, definitely ask him about his wares. And somebody please publish more of his stuff!