Keith Mark Gaboury earned a M.F.A. in creative writing from Emerson College. His poems have appeared in such literary publications as Poetry Quarterly and New Millennium Writings along with chapbooks from Duck Lake Books and The Pedestrian Press. He has a forthcoming chapbook from Finishing Line Press. Keith lives in Oakland, California.

For more than fifteen years, Keith Mark Gaboury has spearheaded action to promote literary engagement. Moving forward, he is seeking to build more literary avenues in the Bay Area, nationally, and globally. Feel free to contact him if you’re interested in a collaboration to support a platform of expression from a diverse range of voices who have a right to be heard.

In the Bay Area, he is a regular attendee at literary readings, open mics, and workshops, including Saturday Night Special, Naked Bulb, Quiet Lightning, and The San Francisco Creative Writing Institute.

From such topics as science fiction, surrealism, and religion, his poetry perceives reality through a disjointed lens. Whether a poem travels to the moon Europa or slithers along a Brooklyn sidewalk, unexpectedness is ripped open where the strange is truly beautiful.

Keith is a poet, preschool teacher, and runner in Oakland, California.

Keith Mark Gaboury earned a M.F.A. in creative writing from Emerson College, but then he needed to move from fantasy to money. So he started working as a preschool teacher. In 2016, Keith rode a dragon from Massachusetts to California. Financial claws are now planted in Oakland where he writes poetry and instills dragon empathy into young minds.

Why I Became a Poet

I’ve always loved language. As a child, I was published in Anthology of Poetry by Young Americans (1995 Edition). Language captivated me. I carried that literary wonder throughout public school, undergraduate, and graduate school. On my first day at Baker University, I knew I wanted to study creative writing as an English major. I’m still amazed at the power a poem contains. By exploring various poetic forms and structures, I am ceaselessly striving to push myself into uncharted territory on the page. Throughout my development as a poet, I’ve had pivotal teachers who have molded and inspired me, including Molly Runde (Olathe North High School), Marty Mihalyi (Baker University), Camille Dungy (San Francisco State University), John Skoyles, Peter Shippy, and Jonathan Aaron (Emerson College). They each played a vital role in the poet I am today. Thank you now and forever. 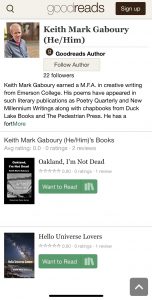